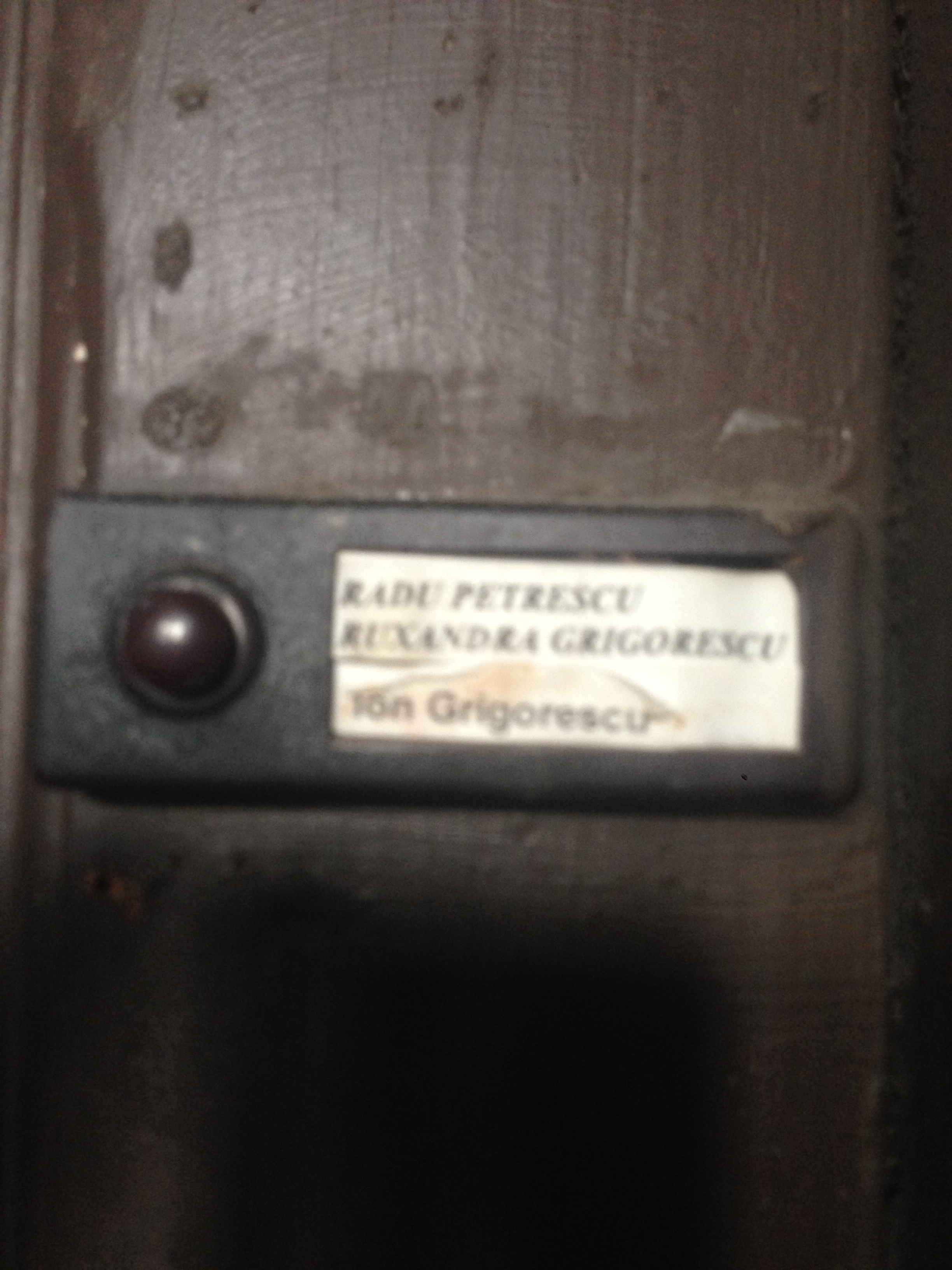 Arriving at Grigorescu`s home at 10 am as usual, I`m very excited how we will proceed when I ring the bell, next to his, the names of his father-in-law, the writer Radu Petrescu and his wifes names on that bell.

I already have a bad conscience about him spending the 4th day in a row with me, spending approx. 10 hours daily showing me his work and commenting on it – if I ask the right question, that is. His personal archive is perfectly organized and digitalized, although it is an order that might seem like chaos for the outsider. But it isn’t. There’s also an analogue archive in a cupboard in his room: any catalogue or the dates of any of his works in an old diary are just an arm’s length away.

(Though there is going to be a problem with the dates and titles of his works for future research as the titles differ [so do their English translations] and the dates of works are hard to remember after so many decades. And he is the only one who would know.)

At one point he tells me that we can go and see his exhibition in Bucharest at 12 p.m., one that he didn’t exhibit in, but which he curated. I’m more than excited because due to the increased interest in his works especially since 2008 in the international “high life” (as he calls it), he has had many encounters with curators on a very wide spectrum. And that curators are the new censors might seem only one of the oldest critiques — if one sees the works, it is clear what is meant.

The exhibition is in a small gallery close to the House of the Parliament and when we approach the building the first thing one notices is that a beautiful dress is in the shop window with a text — at first I thought this was a very exclusive high fashion display window in the style of want-to-be avant-garde designers inspired by a non-existent, utopian “Berlin-style fashion”.

But it turned out to be a piece of the exhibition, which is hung and staged in a very simple but highly precise manner. Next to the staircase are staged pictures, on the first floor you can find lithographies, drawings and photographs – as well as a vitrine with the drawings and a text in an invented language by Mr Grigorescu’s son, Emil. One of the pictures from the 1960s is from an artist who – as Mr Grigorescu tells me – is now a monk in a monastery and it is very hard to get in contact with him and he doesn’t even want his work to be shown. In the whole exhibition, some lesser-known artists are represented with images and pictures, which don’t reflect what is in the broader spectrum of “contemporary art” – seemingly. Because they are also contemporary. In another way.

When I asked Grigorescu what his motivation behind curating this show was, he told me there had been no specific concept or idea, but he tried to exhibit these works in Timişoara and by chance he found out about a conversation with his galerist, who declared that he doesn`t want to have an old man’s spleen in his show, only works by Grigorescu himself. So Grigorescu took the works and exhibited them in Bucharest.

This seems to be a kind of strategy of Grigorescu against the rules of the curators and for his individual and artistic freedom, as there was another occasion when the curator of the Romanian Pavilion at the Venice Biennale in 2011, Ami Barak, refused to show the carpet series by Grigorescu, which he then exhibited in Bucharest. One image that appeared in the Venice catalogue was covered with a white cloth with text on it during the Bucharest show. Grigorescu said that when they hung the exhibition in Bucharest, a letter came from the curator, stating that every image that appeared in the Venice exhibition or the catalogue couldn’t be exhibited during the time of the Biennale — judicial restrictions would follow otherwise. So in the historical manner of censored images attested to another historical period, Mr Grigorescu covered it with that piece of cloth. The curators are the new censors – staged by Mr Grigorescu.

We also met Erwin Kessler in the exhibition who handed us his newest catalogue about Horia Bernea and Ion Ţuculescu. They had a discussion, which I, of course, didn’t understand and when the owner of the place asked who I was and Mr Grigorescu told him that I was an “art critic”, I meant to hear “merde” so I corrected him, and said that I’m actually an “art historian”. It didn’t seem to be a better choice though — neither for me nor for him. After picking up two pictures we drove home.

And we continued to work. From 2 p.m. to 9:30 p.m. It was I who had to apologize and stop the working process, as Mr Grigorescu’s energy seems to be endless. Only at one point did I notice a short interruption — where he had to yawn discretely while he was saying: “I’m the first victim of my films.” — with an unprecedently sharp self-irony I had never heard from him before.

So after I left his house in the night, full of massive impressions and despair about the impossibility of my language to communicate about his subject, I dropped my things in the hotel room and I was already late to meet the artists Mona Vatamanu and Florin Tudor, my old friends from the time when I curated their first solo show in the Ludwig Museum in Budapest. It was impossible to get a taxi because of the demonstrations – and after arriving at Mona and Florin’s home we immediately started to discuss the current situation (which was not clear to me as I couldn’t follow the news). They told me that unfortunately even more people had died in the hospital because of the fire at the nightclub and that a high representative of the Orthodox Church had said that the people who were attending that tragic concert were “Satanists” anyway.

I made my way with Mona, Florin and their wonderful daughter Clara (who speaks fluent English and German at the age of 8 or 9) to join the demonstrations, but when we arrived and came out of the Metro a completely different picture was there than yesterday: nationalistic songs at the highest volume, Romanian flags without the hole (the sign of the revolution 1990) and football hooligans headbanging. Total aggression and a completely different atmosphere than yesterday. On one of the banners was a citation from the Bible, “Without us you can do nothing”, and the image of an icon. This made even Florin and Mona anxious about the direction the demonstrations were taking and we decided to leave immediately. After arriving home at my neo-baroque hotel (which was to me reminiscent of 19th century Bucharest how I imagined it) I couldn’t sleep at all the night before the last day with Mr Grigorescu. I thought about the whole process and I was sure I would fail. I must fail as I have to make an interview, an impossible interview, because it was strikingly clear to me that it would be an impossible dialogue to happen between an art historian and a real artist. Not because of a false respect or an over- or underestimation of one’s possibilities, but because there was no common language of understanding. Speechless. Completely. And I was awake all night to find out how I could overcome this speechlessness although I knew, I was sure that I would fail. Completely. But I had a mission — and I had to be brave. Or pretend to be. But my sleep was restless and my dreams bewildering — as I could hardly wait to get up and go over to Mr Grigorescu’s house – for the final day, where I had to record this damn interview with him – with a person who was self-interviewing himself through images and texts all his life. I was in fear.