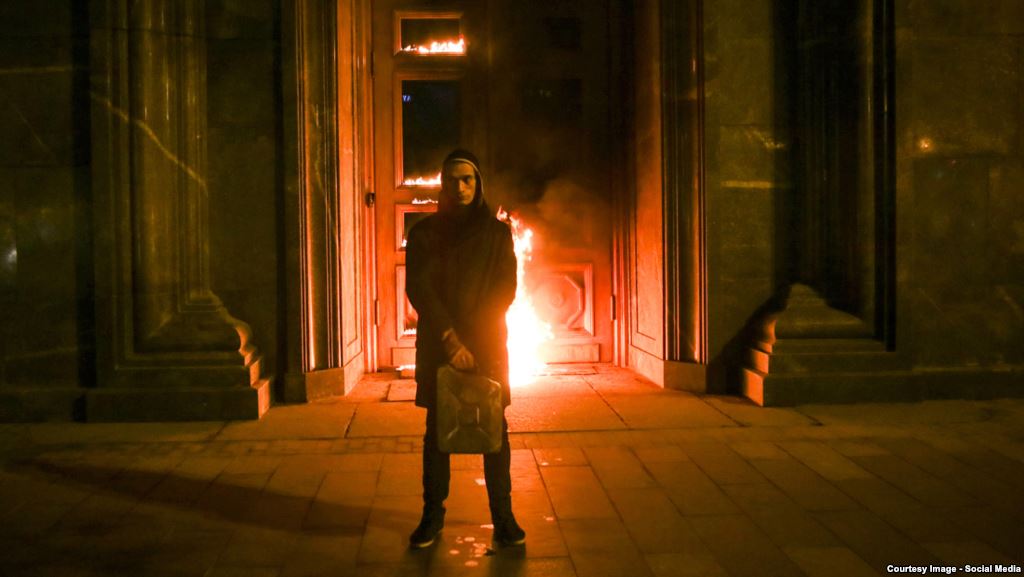 On the night of November 9th, 2015, the radical performance artist based in St. Petersburg, Petr Pavlensky, set fire to the main entrance door of the Lubyanka building in Moscow, home to the headquarters of the Russian Federal Security Service (FSB).

“The burning door of the Lubyanka is the gauntlet being thrown down by the population in the face of a terrorist threat”, claimed Pavlensky, the “terrorist threat” he refers to being the methods employed by the FSB. Thus, “Threat” (Ugroza) is also the title of the action. After he had doused the massive double doors with petrol and set them aflame with a cigarette lighter, he stood before the flames, legs apart, holding the empty jerry can in both hands; then, all the while being filmed by the two journalists who had attended the event, he waited. Motionlessly, he waited to be arrested by the security officers of the FSB (naturally, he didn’t have to wait long).

What a contrast to the art-activist group Voina, who in 2010 (and not for the first time) ran away as fast as possible from the scene after having overturned a police car for their video performance, “Palace Revolution”!

Both Pavlensky and Viona direct their actions against the executive, the police, and the instruments of secret service, among others. In order to show that one need fear neither law enforcement nor the state itself, Voina aggressively led the charge by setting itself on a collision course with the state and its representatives – and in the end, for the most part, ran away from these confrontations with police. Pavlensky, on the other hand, did not. Regardless of whether he is lying naked, wrapped in barbed wire before the Legislative Assembly of Saint Petersburg, as in his 2013 action “Carcass” (Tuša); or nails his scrotum to the stone pavement of Red Square, as in his action “Fixation” (Fiksacya), which took place in November of the same year; or whether, as in 2014, he cuts off his right earlobe while sitting on the roof of the Serbsky Scientific Center for Social and Forensic Psychiatry: he doesn’t just not run away, but ensures that he can hardly move.

For one thing, Pavlensky creates striking images in order to show how, in a repressive legislative system, every human act elicits a legal response that is directly inscribed upon the body of the individual; he creates “metaphors for the apathy, the political abeyance, and fatalism of contemporary Russian society”. However, he accomplishes one thing above all else: By means of his own immobility and helplessness, he renders the state officials equally helpless. Through the violence that he, in accordance with the best traditions of body-art, perpetrates against his own body, he disrupts the monopoly on violence and the authority of the instruments of the executive. When confronted with a naked, presumably often hypothermic, maltreated and wound-covered body, state officials become very cautious, delicate even. Pavlensky does not injure or offend others’ (religious) feelings – as the thus-accused turn-of-the-millennium performance artists Avdey Ter-Oganyan and Oleg Mavromati, or more recently, the punk activists of Pussy Riot have allegedly done – instead, he injures himself.

The reactions of police as proxies of the executive, or likewise the court as the representative of the judiciary, are a crucial and calculated element of his actions. The rather splendid reports of the head of the inquiry that followed Pavlensky’s action “Freedom” (Svoboda) bear witness to this. Having, along with several others, publicly displayed support for the Euromaidan protests in Ukraine by taking to a St. Petersburg bridge and burning car engines and tires, he apparently initially faced charges of disturbing the peace (‘Hooliganism’), which were later downgraded to vandalism. The reports, which read like a crash course in the history of 20th and 21st century art, or more specifically, performance, eventually led the head of the investigation to switch sides.

Currently, Pavlensky is in police custody, facing charges of politically or ideologically motivated vandalism. Or, to be more exact, he is in custody because he refuses to make a statement until the charge is upgraded to terrorism. In doing so, he is alluding to the conviction of the Ukrainian director, Oleg Sentsov, who in August of this year was sentenced to 20 years in prison for ‘terrorism’. According to the indictment, Sentsov is supposedly the head of a terrorist organisation, which, among other criminal acts, allegedly set fire to the main entrance of the office of the Russian Municipality of Crimea. Pavlensky spoke on the subject in a courtroom interview: “The state calls for a fight against terrorism, and I am fighting against terror. I have repeated the act [that Sentsov stands accused of]. Therefore, by the logic of this justice system, I should not stand charged of vandalism, but of terrorism. Either it is, by this logic, terrorism, or it is just a gesture.”

It remains to be seen to what extent the court, when faced with this kind of legal auto aggression, allows itself to be pressed into a similarly helpless position as those policemen and -women who, as he sat naked in the Red Square, could do nothing but awkwardly throw a white blanket over Pavlensky, in the hopes of covering the exposed body.

Translated from the German by Kyle Greenwood