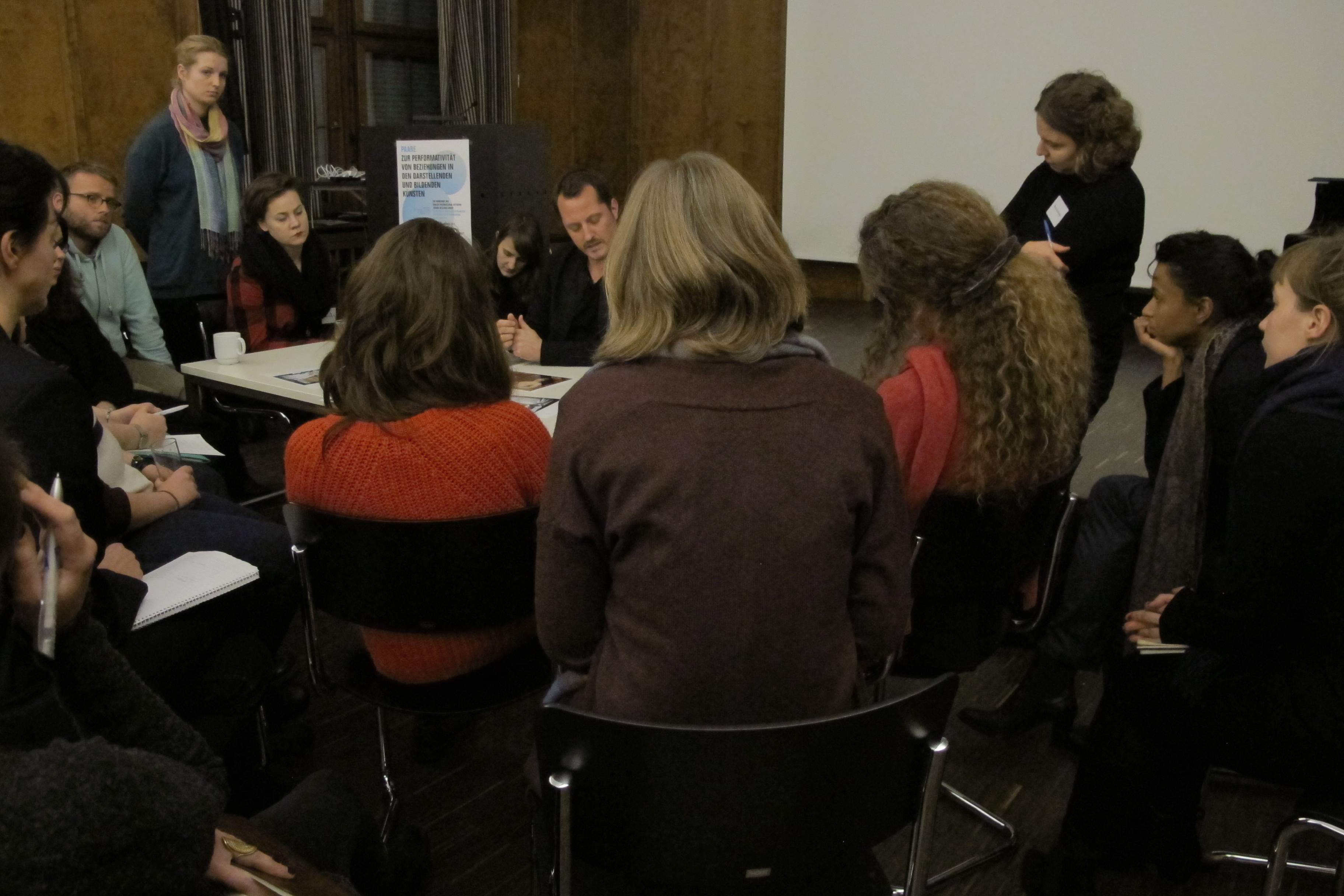 Night buses, night trains and night flights have been my favored way of moving around lately. No real comfort, no sound sleep either, just plain moving forward, a night shift of seating and reading. Then: the cityscape in all its blue glory, a sunrise slowly adding nuances of yellow and pink to the skyline. Stepping out into the city and walking among the early birds hastening towards their duties, taking in the atmosphere. (Do birds, even early ones, actually have duties?)

One of these night trains took me to Berlin, where I was invited on November 20-21 to take part in a workshop at the Department for Theatre Studies of the Free University Berlin. The workshop was part of the research project “KunstPaare” led by Jenny Schrödl and her inspiring team of young researchers. It aimed at taking a closer interdisciplinary look at couples in the performative and visual arts, in literature and social sciences. The performativity of the figure >couple< was to be scrutinized by a dozen of German-speaking scholars from various backgrounds. And I was there to speak about my PhD topic, ie. about artist couples in Yugoslav performance art during the Communist period.

I started my doctoral studies about exactly a year ago at University of Zurich. Interestingly enough, my doctoral curriculum actually all started with a get-together for PhD students in this very room at the Department for Theater Studies in Berlin-Steglitz. I remember being elated about getting to know such smart folks but also feeling not quite at ease with this new research subject of mine about which I still knew so little. To say the least, I was speechless, could not even pronounce a few articulate sentences about these performance artists I would be doing research on for the next couple of years. And here I am again, after a whole year of research at U of Zurich and around Ex-Yugoslavia (Belgrade, Ljubljana…), full of new input and after a long night shift of last-minute preparation, ready to speak about an exhibition that took place in June 1974 in Belgrade, 1 & 1, conceived of and curated by artist Raša Todosijević. In this exhibition, fourteen artist pairs were asked to contribute artworks — or the documentation thereof — produced in a process of double authorship. All propositions had a processual aspect: be it the photographic endeavour of German artist couple Bernd and Hilla Becher making a non-exhaustive but systematic inventory of architectural shapes — their “anonymous sculptures” —, two mail-art submissions as participatory gestures, or the many performances documented through photographs, drawings and texts, it is all about co-authored art, some kind of pair performance.

All the talks given during the workshop were thought-provoking and stimulating. There is one that especially caught my attention, though. Because of its contents as well as its form — Matthias Weiss gave much thought to both. His address was the very last one after two intensive days of discussions, he had been chosen to close the line-up. Before starting, he made slight changes in the room’s arrangement, breaking the democratic U-shape, ordering all the chairs around one table, calling everyone to come closer and sit down, like a storyteller about to recount a fairy tale to his mesmerized audience. Dressed in black, his hands resting next to a pile of photographs on this unusual stage-like white table top, Matthias told us he decided for once to turn his back to the all-digital and the impalpability of slide presentations to come back to a physical, tangible means of communication. He thus brought and showed reproductions of famous paintings of “Unequal Sisters” as the title of his critical talk on comparison as an instrument of Art History stated: Gabrielle d’Estrées and her sister by an anonymous painter of the second School of Fontainebleau, a twin self-portrait by Frida Kahlo that has a somewhat similar composition, various paintings that clearly quote Kahlo’s self-portrait and a black and white photograph of conjoined twins, so-called Siamese, physically joined at the head. Matthias illustrated his point with some brio: the method of comparison so dear to art historians assuredly has its limits, it is only moderately productive. And still, its appeal cannot be fully discarded. Here something urges me to chime in: even within performance art for example, the überfamous mannerist painting of a nude Gabrielle d’Estrées and her sister nurtured the work of numerous artists: Tanja Ostojić and Marina Gržinić staged an evident reference to the painting taking the peculiar pose for “Politics of Queer Curatorial Positions: After Rosa von Praunheim, Fassbinder and Bridge Markland” (2003). After seeing the performance “The Artist Is Present,” Marina Abramović sitting motionless in MoMA’s atrium in spring of 2010, I made a painting called “The Artist Is Present (fake)” showing my naked self next to the artist, impersonating the painting and the performance at the same time. In the ensuing discussion, I couldn’t help but compare my work with the paintings Matthias Weiss had just examined so readily, so I shared it with him and the audience.

Comparison was a big topic that also accompanied me earlier that month on my trip to New York City (once again a destination I reached after a long night’s ride on a bus). I went to NYC to visit the group exhibition Transmissions: Art from Eastern Europe and Latin America (1960-1980) at the Museum of Modern Art. The comparison entailed in the subtitle brings together two far-away geographical regions, the link of which probably resides in their respective histories of totalitarian political regimes. It is nothing new though, as several curatorial and research projects of the past decade have picked it up already: in 2009 the exhibition Subversive Practices at the Württemburgischer Kunstverein in Stuttgart and its comprehensive catalogue (Hatje Cantz, 2010) to which colleague and friend Sabine Hänsgen collaborated, but also a special issue of journal ArtMargins on Artists’ Networks in Eastern Europe and Latin America (2012) for example.

Transmissions is the exhibition that opened the season at MoMA, a week or so before the opening of a Picasso sculpture exhibition. I had been looking forward to it as soon as I heard about it; I sadly couldn’t make it to the opening. Instead, I had been browsing the prolific online material complementing the exhibition on the MoMA website. Thanks to the C-Map Project, MoMA curators and contributors have been creating a fairly diverse set of online resources on Eastern European Art of the 20th century. Articles by art historians and curators, excursion diaries, video footage of talks at MoMA…
What were my expectations entering the exhibit? A well-documented, thorough research, well transmitted to the broad MoMA audience. First thing I noticed upon entering the exhibition space: it was full of artworks but fairly empty of visitors, lots of space and time to look at everything, while the Picasso exhibit two floors below was packed… Oh well, the disparate and obscure character of the art exhibited in Transmissions couldn’t compare with good ol’ Picasso.

I was enthusiastic about finding a large range of artworks, starting with neo-constructivist experiments (Julije Knifer’s meander, cf. photograph above) and performance art documentation (Milan Knížák’s performance files 1962-85, pictures of Slovenian OHO group). There was a thematic and somewhat chronological organization of the exhibition space. One thematic room that I was especially interested in was the one on feminist practices: mostly works from the 1970’s, Geta Bratescu from Romania, Sanja Iveković and her gender-critical collages were there, Marina Abramović and her flaming “Rhythm 5,” Ana Mendieta for the Latin American comparison, Tomislav Gotovac for the male take on the female issue, and VALIE EXPORT’s “tapp- und tastkino” (tap and touch cinema) for example. What did you say, Austrian artist VALIE EXPORT!? I do admit Vienna is situated in the far Eastern outskirts of Europe, indeed, but isn’t it considered a major cultural capital of Western Europe? What is the curators’ concept of Eastern Europe that makes them include this Western European artist while all other artists shown come from totalitarian Communist regimes?

A further exhibition space is dedicated to art dealing with political and daily parameters of life, including Iveković’s intriguing “Triangle” piece staging a private/public tension within Yugoslav decorum: a series of photographs show the artist masturbating on her roof terrace on the day of Tito’s parade in her home city of Zagreb; a sniper from the secret services on a nearby rooftop who supposedly spot her not participating in the parade and engaging in this highly private activity; and the crowd of good citizens below, indulging in the exciting Yugo public life. The next room shows narratives of family, I think there are only Latin American artworks, mostly paintings and sculptures, no conceptual art or performance. In a nearby space, there is famous and colorful Polish poster art next to Latin American posters looking very similar. Its lack of contextualizing info material is a bit disappointing. This is a critique that applies in my eyes to the whole exhibition. Not having much background knowledge on the political, historical, and artistic contexts of Latin America, most thematic spaces dedicated to it remained hermetic for my understanding, and I suppose that, the other way around, it must have been quite tedious for visitors not knowing much about Eastern Europe. Nevertheless, I was definitely charmed by the meticulous overview given on these various art movements from the 60’s through 80’s, the MoMA undeniably owns an impressive collection that is worth being examined. I could give here an only highly fragmentary insight into the exhibit.

I was hoping to find some more context and to be able to keep the overview and the knowledge thus showcased in an in-depth, detailed catalogue edited by the exhibition’s curator team, but to my surprise there was none. Not a thorough one, but no small incomplete one either! (What a pity.)  In disbelief, I asked several times at the museum’s bookshop, until the salesclerk told me in a confidential whisper: “– It’s all because of Picasso,” he said, –“Picasso should have occupied the 6th floor, but the space was way too big, the architecture wasn’t right for his sculptures. So they put Picasso on the 4th floor and they had to cook up an exhibition for the 6th floor in a hurry… No time for a catalogue. Sorry, ma’am.”

All photographs of the FU workshop and the MoMA exhibit are taken by the author.