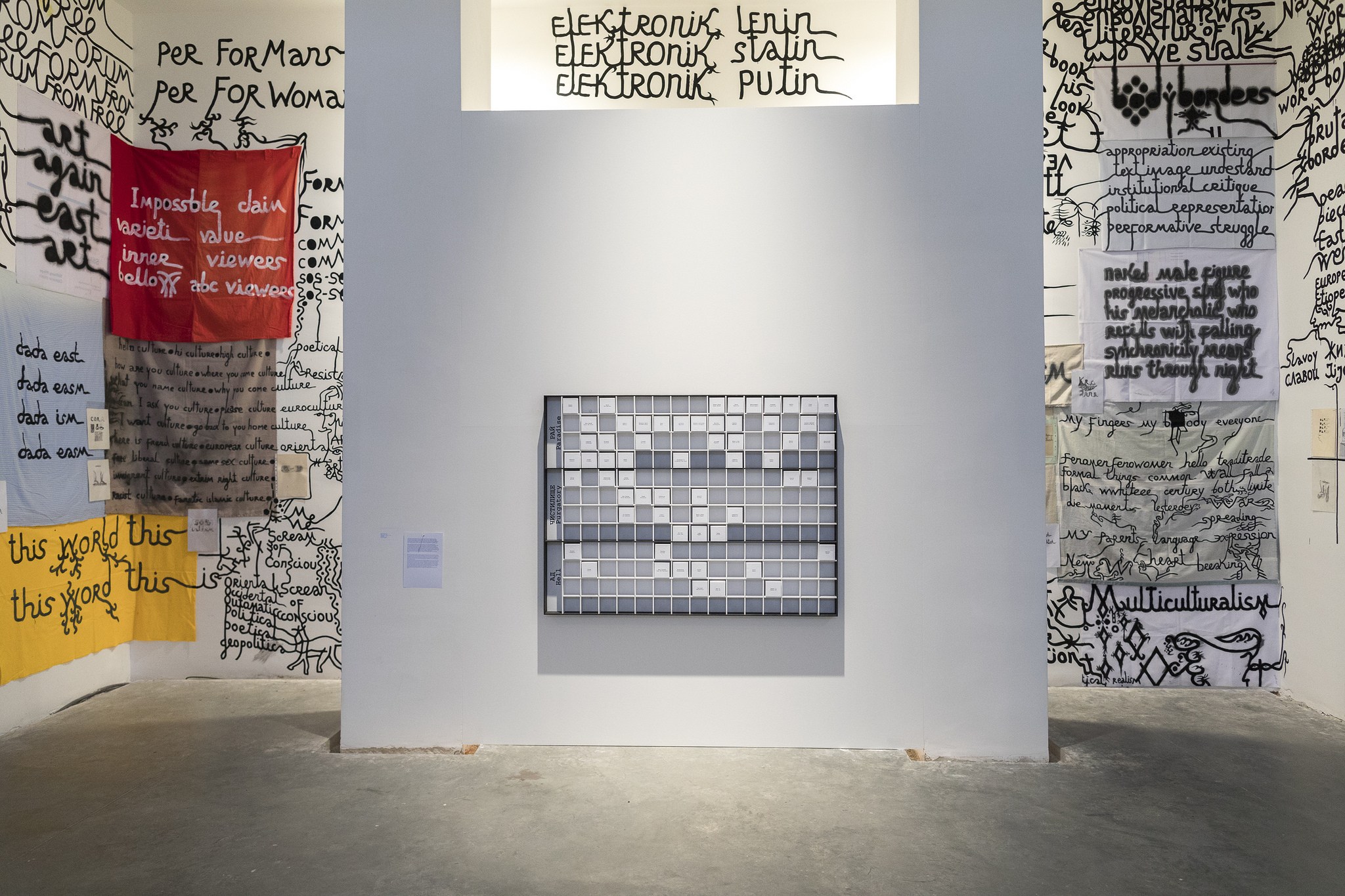 In the second half of the twentieth century, poets and artists in particular took up the challenge of reflecting on and investigating the instrumentalization of language for communicative and political-ideological purposes. They did so by drawing attention to the “made-ness” of language, its material and medial dimension, and by creating performative situations for themselves and their audiences within which possibilities of verbal expression could be tested and acted out. Poetic performance makes tangible the limits of language and speakability.

In Eastern Europe, poetry and performance are characterized by a double subculturality: on the one hand, they undermine the conventional perception of script and words as neutral means, which on the other hand, was unacceptable against the cultural-political backdrop, forcing them into the unofficial or partially tolerated cultural scene.

The writing practice of samizdat as well as artists’ self-publishing and their relation to the devices of concrete and visual poetry have been treated and presented in previous projects. Until now however, less consideration has been given to the circumstances of performance. In addition to the typescript literature of samizdat or self-archiving practices, subcultural milieus attached particular importance to the oral recitation of poems, makeshift exhibitions, poetry actions and artistic interventions in public space. The interrelation between text and situation in poetic acts functioned as a trigger for performances and happenings – a very specific and notably Eastern European characteristic of performance art.

The focus on artistic positions from Eastern Europe in our exhibition does not imply a territorialization of the topic, however. With the term ‘perspective’ we aim at a change of viewpoint to opening up new horizons of reflection on what we do and on what we are able to do with language in general. In Eastern Europe, we can observe a specific sensibility for the power and at the same time the fragility and vulnerability of language developing over many decades.

Poetry and performance have produced specific milieus within the diverse cultures of Eastern Europe. There were parallels developing between movements and approaches separated not only by the Iron Curtain from the developments in the West, but also, paradoxically, by barriers between those Eastern European cultures themselves. Nevertheless, what we can see as a characteristic feature here is a transgression of the conventions of national culture and the emergence of international networks. Our exhibition wants to contribute to the current re-discovery of these connections of which, until recently, there was very limited awareness.

One of our special concerns is the tension between singular artistic positions and the phenomenon of artistic collectives defined by the specificities of local milieus and subcultural communities. In this exhibition we want to recreate such milieus or to make them accessible by way of comparison, working with thematic groups focused on artistic practices. Nová synagóga in Žilina challenged us with its strongly centered space and the extraordinary high ceiling of its cupola. The exhibition architecture by Slovak artist Matej Gavula reacts to these conditions by deconstructing the unity of exhibition walls and rejoining once fragmented units of a modular system. Singular exhibition panels are connected with one another in a network structure on a horizontal level. Each panel is differently oriented in space, relating to a centrally positioned single vertical panel and all together they form a model of utopian agora. Thus, tension and gravity symbolize controversies and political agencies of Eastern European subcultural movements. In the composition of the show various types of exhibits coexist: text scores, interactive objects, sound and video recordings, films and installations of performance documentation.

The exhibition presents authors from subcultures in socialist states along with contemporary positions that continue the legacy of combining poetry and performance. It shows the efforts of poets and artists to break free from controlled language and normative communicative now and then. “Poetry & Performance. The Eastern European Perspective” thus confronts the current social challenges in the post-socialist countries through the prism of language and ideology and looks back at their points of departure.

The condensed forms of poetry and performance take on an exceptional topicality in periods of political crisis, as these ephemeral and flexible art forms enable the reflection of relations and contexts that remain otherwise undiscussed.

Performance places the poetic text in a situational context of production and reception. Beyond the printed word, typographic experiments evolve from a physical process of writing by hand and producing texts by typewriter which often gain the form of aesthetic objects. The presentation of poetry by way of poets’ readings implies a further shift from the reception of self-contained works to the perception of poetry in performance situations (Lev Rubinstein). Poets get into direct contact with their audience. In his performance for a video camera “Conversation with a Lamp,” Andrei Monastyrski, one of the founding members of the Collective Actions group, reflects on how the concept of performance developed from poetry, presenting Russian poets of the 19th and 20th centuries in the situation of a reading.  Another prominent approach by many artists and poets is the focus on freeing language from ideological usurpation. They tried to understand to which degree they themselves had unconsciously internalized ideology, for instance when Dmitri Prigov embodies in his reading a Soviet Policeman. In contrast to the meta-linguistic practices of Moscow Conceptualism, Slovak conceptualist Ľubomír Ďurček deals systematically with contextual meaning of a single word, such as the word „truth”. He uses the page format of the page as a limited model space, a performance area in miniature. Monogramist T.D’s  works rather emphasize intimate processes of writing, whose manipulation of figurative language changes the word into a material image or spatial object.

Auditory or phonic poetry can be understood as a further development of sound-poetry in that it not only does it involve the sound of language and the transgressive potential of the voice, but also clearly works with the technical possibilities of audio recording. One of the great technological breakthroughs of the 1960s was the personal tape recorder, which meant that sounds could not just be recorded, but edited, cut, modulated, or mixed. Ladislav Novák experimented with a tape recorder at home before he and other poets such as Josef Hiršal, Bohumila Grögerová and Václav Havel collaborated with a radio studio in the north Bohemian town of Liberec in the late 1960s on a “Semester of Experimental Creation,” during which innovative audio compositions were published over the course of many months. This section also draws on strong international connections made among experimental poets worldwide. Parallels between the works of Milan Adamčiak and Katalin Ladik can be seen in unconventional graphic scores and visual music understood as sound events originated either from the human body or the surrounding environment. Nowadays, stage performances by the Latvian group Orbita use many radio receivers in order to turn authoritative broadcasts into acoustic static as background for the poet’s live voic

Interventions in the Public Space

Spoken or written word in public space confronts poetry with politics and involves direct sharing of ideas within a community or interaction with accidental passersby. In the 1970s, the exhibition-actions of the Zagreb-based Grupa šestorice (Group of Six Artists) the public interventions of the Bosch+Bosch group from Novy Sad practiced what one might call a poetry of immediate impact. Testing the limits of freedom they used the street as an open interactive space to replace the page of a book or conventional exhibition space. In a performance during the period of martial law in Poland, Ewa Partum, naked and wearing only red lipstick, formed the word “Solidarność,” with her lips on a piece of white paper. Pomarańczowa Alternatywa on the other hand plays with the political setting changing one singular letter in a slogan to mock the prohibition of anti-regime banners. The performances of Tomislav Gotovac often involved communication with public opinion through self-exposure and controversy. In contemporary Russia Pavel Arsenev and Roman Osminkin of the  “Laboratory of Poetic Actionism” from St. Petersburg experiment with method and devices aimed breaking out of the safe space of art to intervene directly in social reality.

In the subcultural milieus of Eastern Europe, poetry constantly steps into an intermedial relation to the cinematographic moving image. In the films by Naško Križnar and Nuša & Srečo Dragan from the OHO group from the 1960s, the poetic exploration of the materiality of language is combined with visual cinematographic experiments. Constellations of letters, sentences, quotes, objects, and bodies give rise to filmic situations. Poetry also plays a central role in the self-understanding of 1980s subculture in the GDR, and here too there is a new connection between poetry and film. It was not possible to simply document poetry readings with basic super 8 camera equipment. Lip-synched audio recordings were not yet an option. Necessity was the mother of invention for many poets and film makers who found original solutions to this problem, working with voice-over texts, repetitive recitations or word-letter stop-motion sequences. In the 2000s, the artist and poet Yuri Leiderman and the film director Andrey Silvestrov developed a specific form of cinematographic geopoetics, placing literary ornaments and cultural stereotypes in various landscapes worldwide.

This section focuses on the body as a corporeal place for speech acts. On the one hand, embodiment returns language to its physical origins. The necessity of mediating such corporeal acts in the process of documentation also tends to introduce a distance between action and perception in photo and video performances. By its focus on embodied speech acts, this group of works touches the core issues of radical narcissism, rhetorics of the body, identity politics, gender and gaze. In the trangression of the disciplinary norms that coerce and control the body, the private becomes public. The repetitive formula „Was ist Kunst?” in the video performance by Raša Todosijević opens up a complex set of questions related to art as an institution. The automatism of a despotic phonocentric machine serves as a general metaphor for the connection of totalitarian discourse with the institution of art. Jiří Valoch explores the intimacy of the body with a specific focus on image-text and image-sound relations. In a performance for the photo camera, he articulates the word “Poet,” which the viewers can only read from his lips. Bálint Szombathy also explores image-text relations, but his works are more embedded in the tactile terrain of bodily experiences, as he confronts the bureaucratic operation of stamping with the fragility of the human skin. Nowadays Nóra Ružičková & Marianna Mlynárčiková create experimental fictions in which the institutional context of art production is confronted with amateur discourses such as physical exercise and body-building.

Since the emergence of language-based art practices in the 1960s, poetry is taken literally as a potential field for the examination of language as such. Poetry opens up a horizon for analyzing how words act in various contexts and various media. Language is often understood not only as a means of communication and its materiality, but also as a relational and dynamic field. Poetry thus becomes a self-reflexive medium, a battleground for social change, negotiating working and living conditions under socialism, as in the film “Centaur” by Tamás Szentjóby. The statements of Mladen Stilinović often imitate the form of slogans used in politics and marketing. Stilinović’s chief interest is in language not as a linguistic object, but as dynamic field for confronting ideologies. Phrases taken out from everyday speech are inscribed into a complex matrix of social relations. Vlado Martek’s pre-poetry goes back to synergy of elementary practices and concrete materials used for writing conventional poetry by means of tautology. Babi Badalov is an artist practicing multilingual poetry intervention. His visual poetry often takes the form of a diary, and explores the way language is able to isolate individuals when it is not shared, thereby reflecting the current geo-political crisis through the echoes of his own personal experience.